Jules Jacques Benois Benedict was indisputably a brilliant man and a master of architecture. Through his meticulous attention to detail we are still awed by the talent and imagination of the early 20th century architect who trained in Paris at l’Ecole des Beaux Arts. He practiced from 1899 to 1948, most of that time in the Denver, Colorado area. Accounts of his personality describe him as flamboyant, temperamental, opinionated and an utmost perfectionist. He was known to carry a cane on job sites and would use it to obliterate work that was not to his expectations. 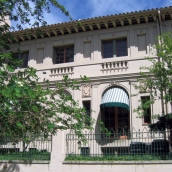 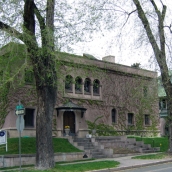 The buildings Benedict created in the metropolitan area reflected his Beaux Arts training. He repeated many of the same architectural elements from building to building, adapting them to the particular structure. Details such as Greek, Roman and Gothic-inspired arches in windows and doorways, ornate iron details and carved stonework were trademarks of his designs.

Another mountain structure, Chief Hosa, was designed and built for the Denver Mountain Parks as a restaurant. Benedict describes his approach to the design of the structure in the following quote:

“Hosa Lodge was always there… We simply piled up the rock in layers, leaving some openings for light. We laid felled trunks across the top and called it a lodge, and it suffices. It remains rock and red bark like its setting.”

Benedict applied these details and the foundation of his training to approach another type of design that he dubbed “Alpine Architecture”. His passion for the mountains was reflected in the preface page to his 1925 portfolio in which he used the verse from PSALM 88:1: “My Foundation is in the Holy Mountains.” He felt strongly about a harmonious association with the site and the use of indigenous materials in his mountain structures.

A Denver newsletter, Municipal Facts, described Benedict and his Baehr Lodge design this way: “a great genius as a designer and his development of a type of mountain house that is indigenous to the soil has been a noteworthy achievement.”

Nestled into the side of a mountain, designed in several levels to adapt to the natural slope of the land it was built on, the home is sensitive to its site, making the most of the commanding views.

This description could be applied to one of his most spectacular designs, St. Catherine’s Chapel perched on the top of a rocky mountain outcropping; the chapel seems to emerge out of the land. The building truly has a sense of place among its surroundings that takes the breath away of motorists who happen to come upon it.

Of the 54 buildings, churches, residences and park structures Benedict is credited with in the Denver area, 23 are listed on the local, state or national registers of significant historic structures. This speaks to his talents as an architect, the validity of the intent and application of his designs.