It’s been a busy end of summer around our office, so much so that we’ve neglected to share inspiration, insights, thoughts and happenings on our blog. We’ll get back to regular updates soon! In the meantime, here’s a snapshot of inspiration from a recent client meeting: 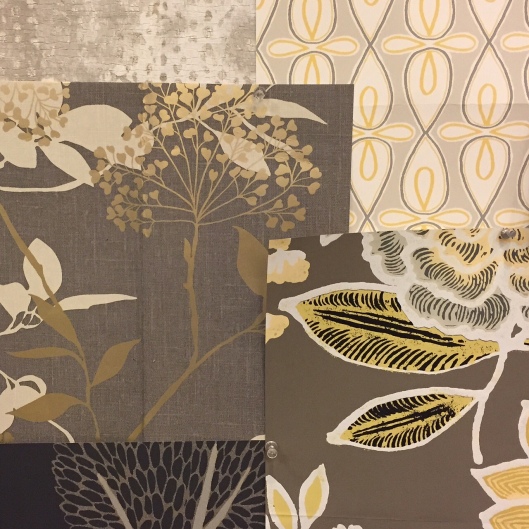 As we leave the office and, for some of us, the city for the long weekend ahead we wanted to take a moment to wish you and yours a sparkling Fourth of July filled with pride, honor and lots of fun! 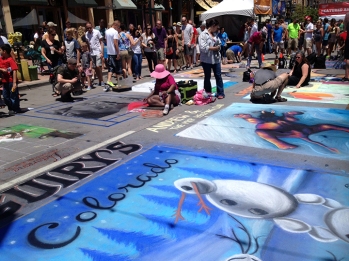 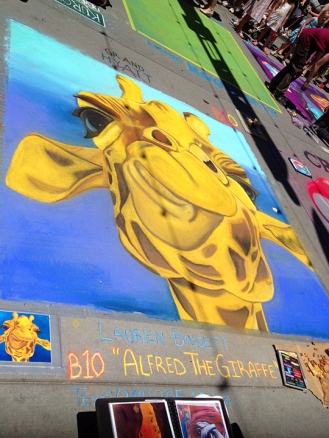 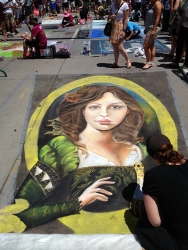 Today’s post is both celebratory and sad. Anna Thexton, our beloved Front Office Coordinator, will end her time with us on June 18th. We knew she would only stay with us for a limited time and in that time she quickly won our hearts and made a substantial impact on our lives – both at work and personally. While we’re going to miss her like crazy, we are thrilled for the next phase in her journey and hope you’ll help us to support her in her future endeavor. Here, in her own words, are the details about what’s next:

I don’t recall the first time someone told me I was a ‘natural leader’, but it was probably sometime in elementary school…

Initially I rebelled against the idea, because to me it meant an increase in responsibility. How many second graders do you see begging for more responsibility? None. Case in point, that’s a lot of pressure to put on a kid who hardly knows whether they want to be a firefighter or a movie star when they grow up. Naturally, I was hesitant to accept being a leader as my destiny, until I tried on a handful of leadership styles and found one tailored to who I am, one I could seamlessly integrate, one that evolved and grew with me, instead of fitting me tightly into a box that would stunt my development.

My time here at Associates III has allowed me to embrace even more leadership opportunities, to hone my assertiveness, and to stretch out my figurative arms and legs in search of the next big challenge.

This year I have been selected as a US-Brazil Connect Fellow to travel to Brazil for leadership experience working with Brazilian high school students.  I’ll be working with a small group of 12 students enrolled in technical education programs, communicating with them on-line and then living in Brazil for four weeks this summer and getting to know their culture and country through our interactions.

In one month, I will be in the south of Brazil, facing head-on what used to terrify me. My students and I will embark on a month-long journey as I coach them in their English language studies. The impact they will have on me is difficult to imagine or quantify, yet something I anticipate to be intrinsically life altering and perspective shifting.

I encourage you to visit the US-Brazil Connect website and see for yourself what amazing things they are doing. I am thrilled to be an active participant in breaking down cultural barriers and sharing life with these incredible students. If you or someone you know would be interested in supporting me, financially or otherwise, please do so here, and feel free to reach out and send me a message with encouragement and lots of good vibes; they are much needed and oh so appreciated!

With all the craziness in the world lately, we needed this reminder: 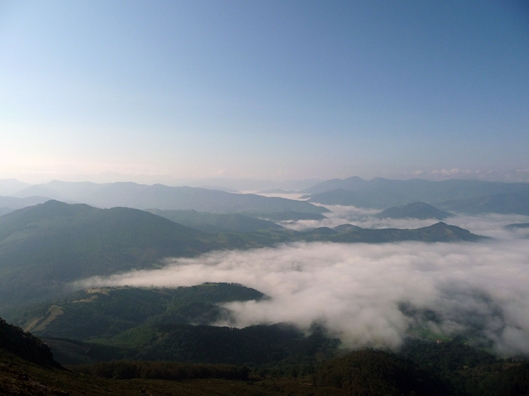 The most beautiful thing in the world is, of course, the world itself. —Wallace Stevens

Posted by periwinkleporte | Filed under inspiration

Grab your canvas totes and head to your nearest independent bookstore because this Saturday, May 2nd is INDEPENDENT BOOKSTORE DAY!

Started in California, and now a nationwide event, Independent Bookstore Day (IBD) is a day to support local bookstores, participate in official IBD events at over 400 bookstores and maybe do some holiday shopping – Mother’s Day (May 10) & Father’s Day (June 21) are coming up!

According to indiebookstoreday.com one reason, among many, to celebrate IBD is that:

Independent bookstores are not just stores, they’re community centers and local anchors run by passionate readers. They are entire universes of ideas that contain the possibility of real serendipity. They are lively performance spaces and quiet places where aimless perusal is a day well spent.

Westword recently published this list of their top 10 independent bookstores in Denver:

If you’re not in Denver you can find your independent bookstore HERE. Or please share your favorite indie bookstore with a comment! 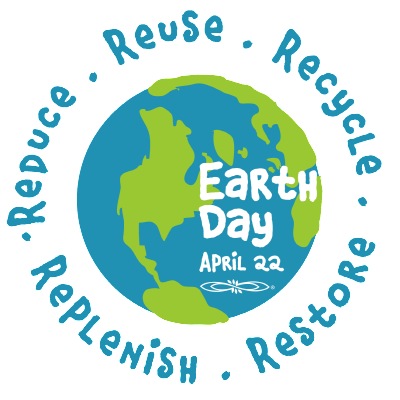 Posted by periwinkleporte | Filed under environment

Jules Jacques Benois Benedict was indisputably a brilliant man and a master of architecture. Through his meticulous attention to detail we are still awed by the talent and imagination of the early 20th century architect who trained in Paris at l’Ecole des Beaux Arts. He practiced from 1899 to 1948, most of that time in the Denver, Colorado area. Accounts of his personality describe him as flamboyant, temperamental, opinionated and an utmost perfectionist. He was known to carry a cane on job sites and would use it to obliterate work that was not to his expectations.

The buildings Benedict created in the metropolitan area reflected his Beaux Arts training. He repeated many of the same architectural elements from building to building, adapting them to the particular structure. Details such as Greek, Roman and Gothic-inspired arches in windows and doorways, ornate iron details and carved stonework were trademarks of his designs. 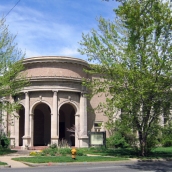 Another mountain structure, Chief Hosa, was designed and built for the Denver Mountain Parks as a restaurant. Benedict describes his approach to the design of the structure in the following quote:

“Hosa Lodge was always there… We simply piled up the rock in layers, leaving some openings for light. We laid felled trunks across the top and called it a lodge, and it suffices. It remains rock and red bark like its setting.” 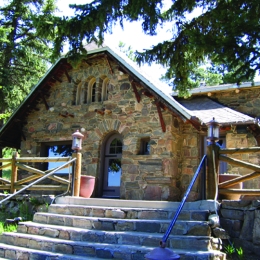 Benedict applied these details and the foundation of his training to approach another type of design that he dubbed “Alpine Architecture”. His passion for the mountains was reflected in the preface page to his 1925 portfolio in which he used the verse from PSALM 88:1: “My Foundation is in the Holy Mountains.” He felt strongly about a harmonious association with the site and the use of indigenous materials in his mountain structures.

A Denver newsletter, Municipal Facts, described Benedict and his Baehr Lodge design this way: “a great genius as a designer and his development of a type of mountain house that is indigenous to the soil has been a noteworthy achievement.”

Nestled into the side of a mountain, designed in several levels to adapt to the natural slope of the land it was built on, the home is sensitive to its site, making the most of the commanding views.

This description could be applied to one of his most spectacular designs, St. Catherine’s Chapel perched on the top of a rocky mountain outcropping; the chapel seems to emerge out of the land. The building truly has a sense of place among its surroundings that takes the breath away of motorists who happen to come upon it.

Of the 54 buildings, churches, residences and park structures Benedict is credited with in the Denver area, 23 are listed on the local, state or national registers of significant historic structures. This speaks to his talents as an architect, the validity of the intent and application of his designs.

Posted by periwinkleporte | Filed under design 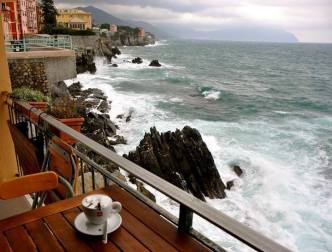 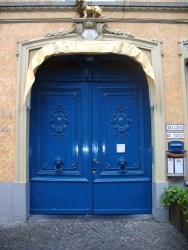 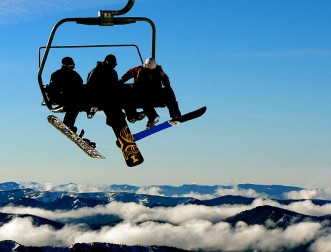 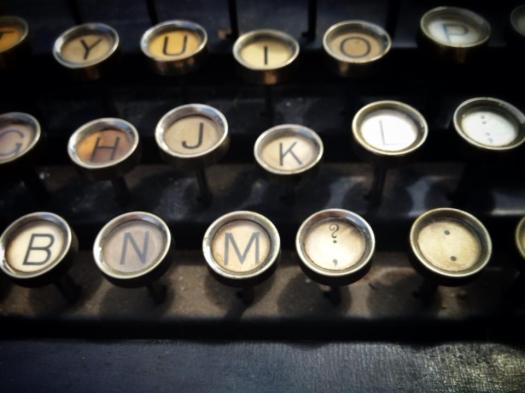